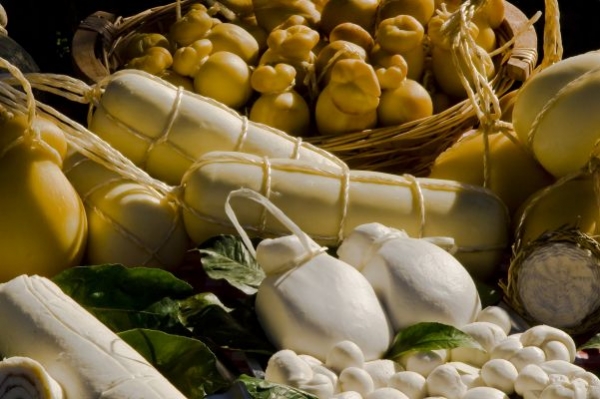 Sorrento Peninsula stands out – besides plantation – also in food and wine thanks to the production of typical worked products, among which the so-called “provolone del monaco”.

This local hard paste cheese has a delicious taste and a certain content of spiciness, which
changes according to the aging between six and eighteen months.

It’s a cheese of different size and could weigh between 5 and 10 kg.

Its pear or wicker wine bottle in shape is its peculiarity and distinguishes it from the classical caciocavallo cheese, because there is no small head closing the top.

It has a hard and thick crust about half a centimetre, golden yellow in colour.

It’s a cheese with a unique taste, still produced today following the ancient processing techniques. For this reason, in fact, we can find the provolone del monaco of Sorrento Peninsula in some stories: first of all, the one linked to its name.

Origin of its name

Beyond what we could think of, this dairy production of Sorrento Peninsula and Lattari Mountains was not created by monks.

The idea of its name, in reality, is due to the similarity with the shoulder bags used by local merchants who carried this cheese using sacks commonly carried on shoulders by monks who collected alms.

Another theory tells that the name was coined by looking at the shepherds coming from the Lattari Mountains, who transported it.

In fact, they dressed themselves with a large cloak recalling the monk’s tunic in order to protect themselves from the humidity of the sea and of the night.

Beyond the stories, the provolone del monaco cheese is considered unique for its taste and its organoleptic properties.

The compact paste and creamy white coloured have rare weeping cracks. In fact, at the first tasting cut the typical “drop” is produced, due to the passage from the natural cold of the aging place to room temperature and as a result of the fatty condensation of the dairy paste.

The provolone del monaco cheese is produced from January to March.

Its production is connected to the breed of cow called “Agerolese”: the property of the milk from this cow is the synthesis of three genetic inheritances (including the “jersey”).

The production of this caciocavallo provides the use of goat rennet: after thirty or forty minutes, reached by coagulation at 38 degrees centigrade, the curd is repeatedly broken by using the “stone” (a rudimentary wooden curd knife), reducing it to wheat grains.

Then the paste is cooked and crushed; it is left to clean out and ripen, then the “spinning” is made. The work is quite difficult: it requires the help of two people who stretch and twist the curd like a rope.

When the paste holds, its shape is given; followed by the immersion in salt solution for a
number of days as the kilos of weight; then the aging begins and it takes place in well ventilated and moisture rooms, such as calcareous caves or cellars with land and lava rocks.