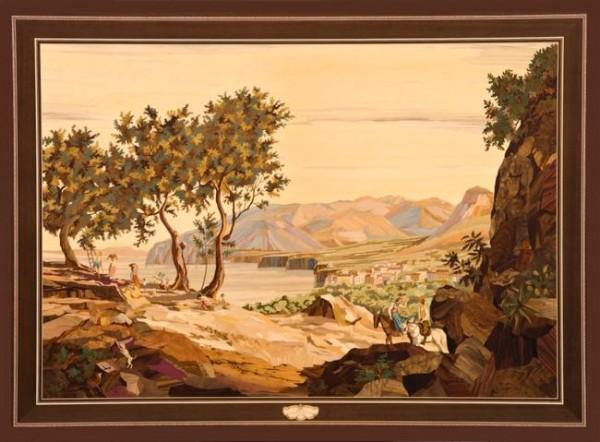 The inlaid woodwork is an art that achieved its maximum artistic language and value.

It consists in creating pictures (views, portraits, still-life paintings) using very thin wood pieces of different colours or tonalities, alternating with foils of other materials (such as ivory or mother-of-pearl) or on which metals and precious stones were set (especially in the Baroque Age).

A bit of history

Even if already widespread in Italy since 1300, the inlay work developed during the Renaissance Age, also if only in a few local areas, such as Tuscany, Piedmont, Emilia
Romagna, Veneto and Naples.

In Sorrento, the inlaid woodwork had its height at the beginning of the 19th century
and it was almost perfect after the creation of a school for the inlay and carving
factory (1886).

The lucky historical moment when Sorrento production thrived coincided with the Grand Tour, characterized by the continuous turnout of artists and writers of the time in the Sirens Land.

So, this event allowed the local handicraft masters not only to be influenced by the many foreign artists who stayed there, but also to further improve their inlay and settlement techniques.

So, the “originality” supported the creation of splendid products ranging from the creation of small panels to that of small boxes, as well as of furniture, marriage chests until one intended for select collectors.

Sorrento inlay work (both in inlay and cabinet work) has been able to stand out and to be appreciated for its choice of absolutely original techniques (in particular, that of mosaic) and materials (wood get from the typical local vegetation).

Initially, the mosaic technique was done by alternating square pieces of various tonalities and it was mainly used for the creation of geometric drawings in order to complete a wider drawing.

Pierce workers, cabinetmakers, carpenters and other minors are workers involved in the inlay work sector.

Each of them holds its own specific position and the production is efficient if all these talents work together.

Until the second half of the 20 th century, Sorrento combined a refined carving work to the inlaid woodwork production.

Over the years, Sorrento production – like the others – has gone through different kind of changes, influences and evolutions, also due to the use of engraving techniques, locally created by Arturo Guidi.

The need to guarantee as many examples as possible for the souvenir market (especially since 1960) , in some cases, has compromised the quality of the local handmade products,
misrepresenting part of their original beauty.

Currently, there is an important trend inversion, also as a result of an economic work selection.

Having left productions that started proceeding to pseudo-industrial workings, Sorrento artisans, less numerous than in the past, are once again focusing on creations that are certainly less cheap, but able to guarantee high-quality standards.